National Cadet Corps is a Tri-Services Organization comprising the Army, Navy and Air Force, engaged in grooming the youth – ‘The Leaders of Tomorrow’ – into disciplined and patriotic citizens. National Cadet Corps (NCC) is a premier youth organisation which functions directly under the Ministry of Defence. It functions at a National level to train the young boys and girls to be better citizens and future leaders of our country.

The NCC has its genesis in the University Corps (UC) which was created under the Indian Defence Act, 1917, with the objective of making up the shortages in the Army. In 1920, when the Indian Territorial Act was passed, the University Corps was replaced by the University Training Corps (UTC). In 1942, the UTC was renamed as the University Officers’ Training Corps (UOTC). A Committee under Pandit H N Kunzru was set up in 1946 at the behest of the first Prime Minister Pandit Jawaharlal Nehru. The recommendations of this Committee paved the way for the formation of NCC. Thus, the National Cadet Corps (NCC) came into existence on 15 July 1948 under the National Cadet Corps Act (No.XXXI of 1948) enacted by the Parliament.

In 1949, the Girls Division was raised in order to give equal opportunities to school and college going girls.The NCC was given an inter-service image in 1950. when the Air Wing was added, followed by the Naval Wing in 1952.In the same year, the NCC curriculum was extended to include community development /  social service activities as a part of the NCC syllabus at the behest of Late Pandit Jawaharlal Nehru who took keen interest in the growth of the NCC. Presently, NCC has approximately 13 Lakhs Cadets under its fold.

Motto
The motto of NCC is “Unity and Discipline“. ‘Unity’ implies our basic oneness, the brotherhood of all the Indian people regardless of their caste, colour or creed. Likewise, ‘Discipline’ is the very bedrock on which any nation is founded. It is for these reasons that “Unity and Discipline” has been adopted as motto of the NCC.

Oath
“I do hereby solemnly promise that I will serve my motherland most truly and loyally and that, I will abide by the rules and regulations of the National Cadet Crops Further under the command and control of my commanding officer I will participate in every camp most sincerely and wholeheartedly”.

Pledge
We cadet of the National Cadet Corps, do solemnly pledge that we shall always uphold the unity of India. We resolve to be disciplined and responsible citizen of our nation. We shall undertake positive community service in the spirit of selflessness and concern for our fellow beings.

At the Headquarters level, this organization is headed by an officer of the rank of Lieutenant General. He is the Director General of the NCC. Two other officers of the rank of Major General, five Brigadier level officers and other civil officials assist him. The Headquarters is located in Delhi. There are 17 Directorates located in the state capitals headed by an officer of the rank of a Brigadier from the three Services. Depending upon the size of the state and growth of NCC in the states, Directorates have up to 14 Group Headquarter sunder them through which they exercise their command and control of the organisation in the state. Each group is headed by an officer of the rank of Colonel or equivalent known as Group Commander. Each NCC Group Headquarters control 5-7 units (Bns) commanded by Lt. Colonel/Major or equivalent. Each Battalion consists of companies which are commanded by the Associate NCC Officer (ANO) of the rank of lieutenant to major. In all there are 95 Group Headquarters in the country who exercise control over a network of 667 Army Wing Units (including technical and girls unit), 60 Naval Wing Units and 61 Air Squadrons. There are two training establishments namely Officers Training School, Kamptee and Women Officers Training School, Gwalior.

There are Three Certificates in NCC. Below describes about it from lower value to higher value:-

The best grade is A grade, which has the highest value.

Camp training constitutes the most important part of NCC training. Every cadet in the NCC is expected to attend at least two camps during one’s tenure to complete the Training Syllabi. In Camps, the young cadets get the thrill and joy of outdoor and community living as they are made to live under canvas/camp conditions and also follow a rugged but interesting routine. Camps also help in developing camaraderie, team-work, leadership qualities, self-confidence, self-reliance and dignity of labour among cadets. This contributes greatly towards promoting national integration. The various camps conducted by the NCC are as follows:-

This Camp is conducted at battalion level to impart practical training in weapons, map reading, communications and firing. The emphasis is given on community living. Through these camps cadet get an opportunity to develop and expose their hidden qualities. Maximum number of cadets are included in these camps and cadet’s potential is identified for the forthcoming Thal Sainik Camp and Republic Day Camp.

These camps are conducted on an all India basis and help bridge the cultural gap among various states of India. 37 such camps are conducted every year. Our country being vast is varied in culture, customs and traditions which is a matter of pride to all. To acquaint the cadets with such diversity, selected cadets from every directorate participate in these camps. Cadets get an opportunity to learn the culture and language of different states. In addition, we conduct NICs at remote and forward areas to promote national integration. Special NICs are being conducted regularly at Leh, Srinagar, North Eastern Region and at Port Blair.

Every year 3 camps at battalion level, 3 camps at directorate (State) level and the final camp at National level in New Delhi are organized. Competitions in communications, Map Reading, Firing, Cross Country and Medical (First Aid) are conducted. The process of screening and filtering of cadets is done at each of the 3 camps at battalion level. The selected cadets participate in the inter-group competitions. Successful cadets again undergo the procedure of screening and filtering at the national competitions. The points scored by the cadets at final competitions are counted for the award of the prestigious Prime Minister‟s Banner.

Republic Day Camp is a prestigious camp inaugurated by the Vice President of India and visited by Raksha Mantri, Raksha Rajya Mantri, Chief Minister of Delhi, the three Service Chiefs and other dignitaries. During the Camp, a Horse Show and three Cultural Programmes are held wherein important dignitaries are invited as Chief Guests. The camp culminates in the Prime Minister‟s Rally on 27 January every year which showcases all the activities of NCC. In addition, groups of NCC cadets meet the President of India and the Prime Minister over tea on separate days. The procedure for selecting the cadets for RDC is same as Thal Sainik Camp. The main focus in these camps is on drill, cultural presentation, and general knowledge and adventure activities. The points scored in these camps are considered for the award of prestigious Prime Ministers Banner.

These camps are attached with regular army. The aim of these camps is to give field training to the cadets and the cadets acquaint them with army exercises.

Our College is established in the year 1998 with affiliation to Univeristy of Mumbai. In order to inculcate national sprit and discipline among students NCC Army Wing was raised in the College in 2009-10. College Comprises Senior Division (Boys) and Senior Division Wing Cadets (Girls).The College NCC plantoon holds a company which comes under 2 Maharashtra Engeeniers Regiment NCC, IIT Bomay, Powai of Mumbai ‘A’ Group., Maharashtra NCC Directorate. The College NCC unit is commanded by Asst. Prof. Subhash Kadam from A.Y. 2012-13 to 2015-16. He nurtured the Unity and Discipline among the NCC cadets. The Senior Division Boys Unit is Presently Commanded by Lieutenant Rakesh Pawar, Assistant Professor and Head of Botany Department.  He has successfully completed NCC PRCN course at Officers Training Academy, Kamptee, Nagpur, Maharashtra.

Empower volunteer youth to become potential leaders and responsible citizens of the country.

To develop leadership and character qualities, mould discipline and nurture social integration and cohesion through multi-faceted programmes conducted in a military environment.

Enrolment:
Enrolment of the cadets is carried-out as per NCC Act, in the presence of ANO, Principal, and  Commanding officer’s nominee, in the month of July, once the academic admissions are over.

35 parades, each of 6 periods, are conducted in college premises. All subjects as directed by NCC organization are taught. The lessons are delivered by ANO, PI staff of the Unit and also by senior cadets as a part of training and preparation for NCC examinations. Practical Training is given on the ground by PI staff and ANO.

Our cadets participate in following camps: 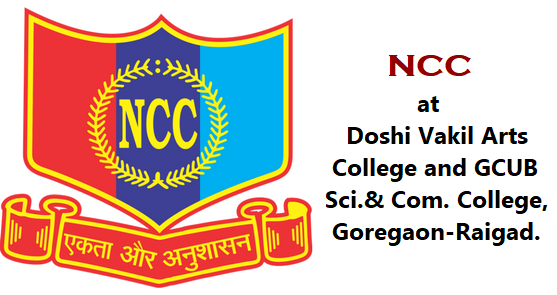 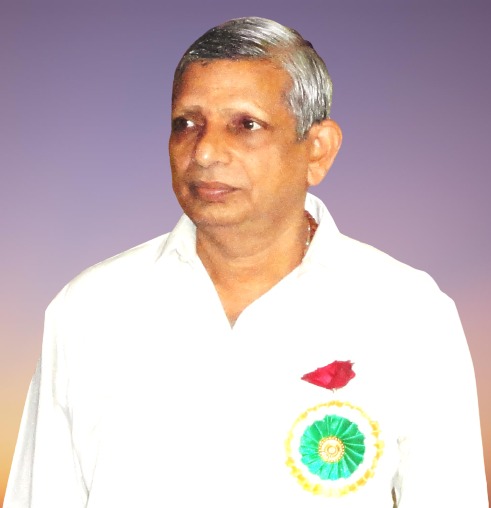 It gives me an immense pleasure in saying that, Mangaon Taluka Education Society’s, Doshi Vakil Arts College and G.C.U.B. Science and Commerce College has achieved a good name and fame with firm foundation on the horizon of education. This progressive college is styled to bring out the talents of the students and motivate them in competitive spirit and confidence so that they can courageously face the increasing competition of today. 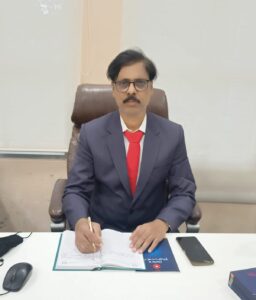 Mangaon Taluka Education Society’s Doshi Vakil Arts College and G. C. U. B. Science and Commerce College was established in the year 1998 to explore higher education opportunities to the students from hilly region and surrounding villages. Read more…